It is a great honor and privilege to introduce to you our new ODP Technical Director, Coach John Curtis.

Curtis has been involved in youth soccer as a coach, administrator, director and parent for 25 years. Prior to accepting the position of US Youth Soccer ODP Technical Director, Curtis was employed by the USYS Member State Association, Minnesota Youth Soccer Association (MYSA), where he served for more than twenty years working his way up through the organization from college intern to Associate Director of Coaching and ultimately serving as Director of Coaching and Player Development. In addition to coaching education, player development and ODP, one of Curtis’ favorite roles with MYSA was community outreach, especially his visits to elementary schools in diverse, and often underserved, areas to work directly with kids and their physical education teachers.

For the past 16 years, Curtis has been involved with USYS’s ODP Midwest Region as a Staff Coach and U13/14 Head Coach. As a Regional ODP Coach, Curtis had the honor of coaching youth who have since gone on to become national team or professional MLS players, including: Michael Bradley, Darlington Nagbe, Ray Gaddis, Ethan Finlay, the late Kirk Urso, and many others. This past spring, Curtis was named the Girls’ Head Coach for the USYS ODP West Region.

“I am honored and excited to join US Youth Soccer as their ODP Technical Director and to continue my work with ODP on a national level,” Curtis said. “ODP is something I have been passionate about at both the state and regional levels because it provides valuable development opportunities for players from all backgrounds and gives them access to resources needed to reach the highest level in the sport of soccer. I am grateful for this opportunity to serve our ODP youth nationally and I look forward to continued collaboration with many of the top coaching talents in youth soccer.”

“John understands the landscape on the boys and girls side of soccer in this country,” says Chris Duke, Midwest Region General Manager- ODP. “John will bring tons of experience and knowledge to USYS and our Olympic Development Program (ODP).” “I am extremely excited to have him on our team and I look forward to working with him to help grow the USYS ODP.”

Curtis brings a wealth of professional relationships, experience and knowledge with him to this new role. From 1997 through 2010, he served as the Assistant Men’s Soccer Coach at St. Olaf and Macalester College, both Division III colleges in the MIAC Conference, working alongside esteemed head coaches, John Leaney and Ian Barker. Since 2016, Curtis has served as part of the US Department of State, Sports Diplomacy and Outreach making several goodwill trips to Haiti with United Soccer Coaches and The Sanneh Foundation to train coaches and players. From 2017 to 2019, he held the elected position of Technical Chair for the Midwest Region’s State Directors of Coaching. Curtis holds his USSF “A” license, National Youth License, Talent Scout License, Grassroots Instructors License and his United Soccer Coaches Premier Diploma. Curtis serves on the national staff for U.S. Soccer, US Youth Soccer and the United Soccer Coaches instructing advanced coaching license courses for coaches across the country. Additionally, Curtis is an active U.S. Soccer Scout working to identify both girls and boys for youth national teams.

“John Curtis is uniquely qualified to assume the role of USYS Olympic Development Program (ODP) Technical Director,” said Ian Barker – Head Coach Boys’ USYS ODP Midwest and Director of Coaching Education, United Soccer Coaches. “In addition to his breadth of knowledge in the technical direction of ODP, he has innovated advancements in providing low or no cost programming to make the program accessible to all players,” says Barker. “As ODP evolves into a relevant and powerful tool in the ongoing identification of young soccer talent and supporting that talent in the development pathway, John Curtis will be a strong leader. In his national role, he will be well placed to support all USYS states and regions collaborating to build a still stronger nationwide program.”

Family is a top priority for Curtis. He and his wife, Jeanne, have two elementary aged children, Evan and Molly. According to Curtis, “We are all excited for this next chapter. My family knows how much love I have for ODP and throughout my career, they have supported my ODP commitments and the time away that it requires. I wouldn’t be able to do this without their unwavering support.” When he is not traveling, Curtis enjoys spending time with his family relaxing on the lake, playing soccer or hockey, roller blading, biking, and skiing. “We definitely make the most of our time together.” 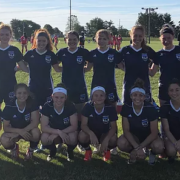 NEW APPOINTMENTS TO THE NHSA EXECUTIVE BOARD!
Scroll to top